If the painter Hermann Wiehl (1900 – 1978) had lived in – or near – one of the major art centres, it is almost certain that he would have been recognised and appreciated as the outstanding artist which he was. But he had lived in the remote Black Forest town of St. Georgen which meant that his work quickly passed into oblivion after his death.

I is thanks to the art dealer and gallery owner "Roland Roeder" who rediscovered the painter in the early nineties of last century that Wiehl’s paintings now enjoy the attention they deserve. The first major Wiehl exhibition in the spring of 1995 in the Hermann Hesse house at the Höri near Lake Constance was a sensation, with the SWF TV station broadcasting a detailed report. The picture volume published by Roeder is now in its second, enlarged edition. The yearly Wiehl calendar, also published by Roeder, is a much sought-after publication. Wiehl’s paintings are found on several classical CD covers by EMI.

Wiehl, classed by the National Socialist in Germany as “degenerate” and banned from exhibiting and selling his pictures during the Second World War, has intensively dealt with the new colour language of expressionism and with the new formal language of cubism. Drawing on solid skills in conventional figurative craftsmanship, he developed an astounding versatility and variety of styles without arbitrary plurality. All his paintings show the handwriting of a strong-willed, expressive and passionate artist’s personality which combines a powerful grasp of reality with a spiritual penetration of the invisible. Many of his works are on a par with works of the first generation of expressionists. 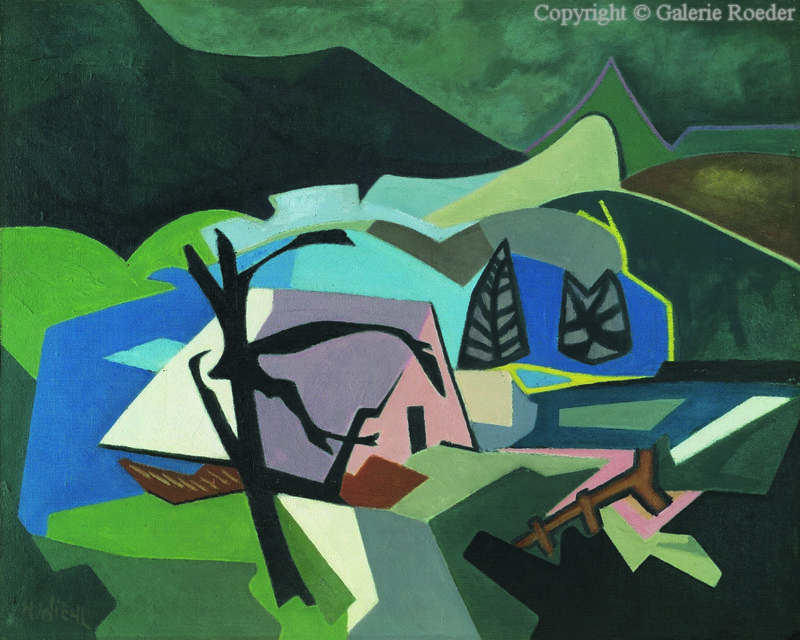 Wiehl found most of his themes in his closest surroundings. No painter before him has seen the Black Forest the way he did.
Detached from the obviously visible, he impressively showed the melancholy nature of this landscape. His friendship with his teacher Otto Dix who lived at the Höri near Lake Constance gave Wiehl a new landscape subject. This landscape is also depicted in his powerful artist’s handwriting, removing it from the quaint and pleasing picture postcard image and showing it as a powerful field force of colours and shapes which reflect the painter’s whole intensity of feelings. His acquaintance with the abstract painter “Max Ackermann” takes Wiehl to moderate abstraction.

Wiehl, who owned a flourishing honey business, was financially independent which not only allowed him to paint without bowing to “public taste”, but which also gave him the freedom to travel extensively where he met famous artists such as Léger, Chagall and Picasso. Today, his works are found in many museum and public and private collections.

Website-Bauen.de
Cookies make it easier for us to provide you with our services. With the usage of our services you permit us to use cookies.
Ok